Our experienced management team offers a bespoke property management solution for all types of real estate: residential, commercial or block

In the first quarter of 2019, the average national square meter price of rental homes in the free sector rose again by 4.9 percent. The national price increase seems to have slowed down since last quarter: then the rent increased for the first time in three and a half years by less than five percent. That trend is now continuing. New tenants paid € 16.33 per month on average per square meter.

In large cities such as Rotterdam, Utrecht and Eindhoven, prices rose faster: rents increased by at least 7.5 percent. Even in some of the suburbs, prices are still on the rise.

Of the five largest cities in the Netherlands, prices in Eindhoven rose the fastest. There, new tenants paid around € 14.94 per square meter per month, an increase of 9.7 percent compared to the same quarter in 2018. The average square meter price of free-sector homes in Eindhoven is therefore getting closer to the square meter price of the four most expensive Dutch cities of The Hague, Utrecht, Rotterdam and Amsterdam. In The Hague, new tenants paid around a euro more per square meter. In the first quarter of 2018, that difference was one and a half euros.

Outside the Randstad, Eindhoven is now one of the more expensive cities. "Eindhoven falls within one of the five regions where the housing shortage is greatest," says Jasper de Groot, director of Pararius. “It is therefore logical that there is a rent increase in Pararius visible in Eindhoven. And not for nothing does the province of Brabant have major building plans. " Plans were made in 2018 for the construction of around 128,000 homes, which should meet the housing needs by 2030 4 . Moreover, the Eindhoven Urban Area is one of the regions where Central Government wants to realize accelerated housing. Up to 2024, therefore, around 27,000 homes will be added to 5. "If we look at that forecast, it is unlikely that the rents in Eindhoven will actually reach the level of the most expensive Randstad cities," says De Groot. "If supply and demand become more balanced, prices will not rise much further".

According to Arnoud Snoeijer, general manager at Stoit Groep in Eindhoven, the demand for rental properties has risen faster in the past year than the - increasing range of - furnished and furnished rental properties. In addition to Dutch home seekers, many expats are also looking for suitable accommodation in and around Eindhoven. “And the group of expats is getting bigger. As a result of this scarcity, we see that the houses are for rent for a shorter period and that prices are rising. Despite this price increase, we see an increased interest in every available rental home. Sometimes there are as many as 20 interested people per home. ”Now that home seekers have more difficulty finding a new rental home, many potential tenants are moving to the villages in the Eindhoven region, such as Nuenen, Veldhoven, Waalre and Son.

According to Snoeijer, it is good that the government will start building housing in this tight region at an accelerated pace. "We are looking forward to it. The result will be that there will be more available rental properties on the market for both the Dutch tenant and the expat, whereby the supply and demand will be more balanced. "

Prices in large cities have risen to varying degrees

Prices also increased in the last quarter in Rotterdam , The Hague and Utrecht . The increase was smallest in The Hague: prices rose by 4.7 percent to € 15.96 per square meter per month. The increase was greater in Rotterdam and Utrecht: new tenants paid 8.6 percent ( € 16.29 ) and 7.6 percent (€ 17.27) respectively compared to the first quarter of 2018.

The price increase in Amsterdam was more moderate. There, prices rose by 3.6 percent to an average square meter price of € 23.28 per square meter per month. "Prices are higher on average, but an increase of 3.6 percent is well below the Dutch average," says De Groot.

Particularly in the G5, as Amsterdam, Rotterdam, The Hague, Utrecht and Eindhoven are also called, the number of households is increasing rapidly 6 . The number of households aged up to 29 in those cities is expected to grow by 7,800 in the coming years. At the same time, the construction of new homes is lagging behind the plans made. According to Capital Value, the lack of suitable construction sites and the rising construction costs mean that less is being built.

The number of inhabitants of Dutch cities is growing fast. In proportion to the number of inhabitants, population growth was strongest in smaller municipalities in the vicinity of these large cities. This development provides an explanation for the price increase that is visible on Pararius. The rental prices of homes in the big cities rise considerably less rapidly than the rental prices of homes in peripheral areas.

For example, in Haarlem , the average square meter price increased by 11.2 percent to
€ 18.89 per month. In Almere - just like Haarlem a city near Amsterdam - prices even rose by 15.2 percent to € 13.78. Rents are also on the rise in Schiedam , a base for tenants who cannot rent a home in Rotterdam. New tenants paid € 13.73 per square meter per month last quarter , 18.3 percent more than the same quarter last year. This is almost three euros cheaper per square meter than a rental property in Rotterdam. 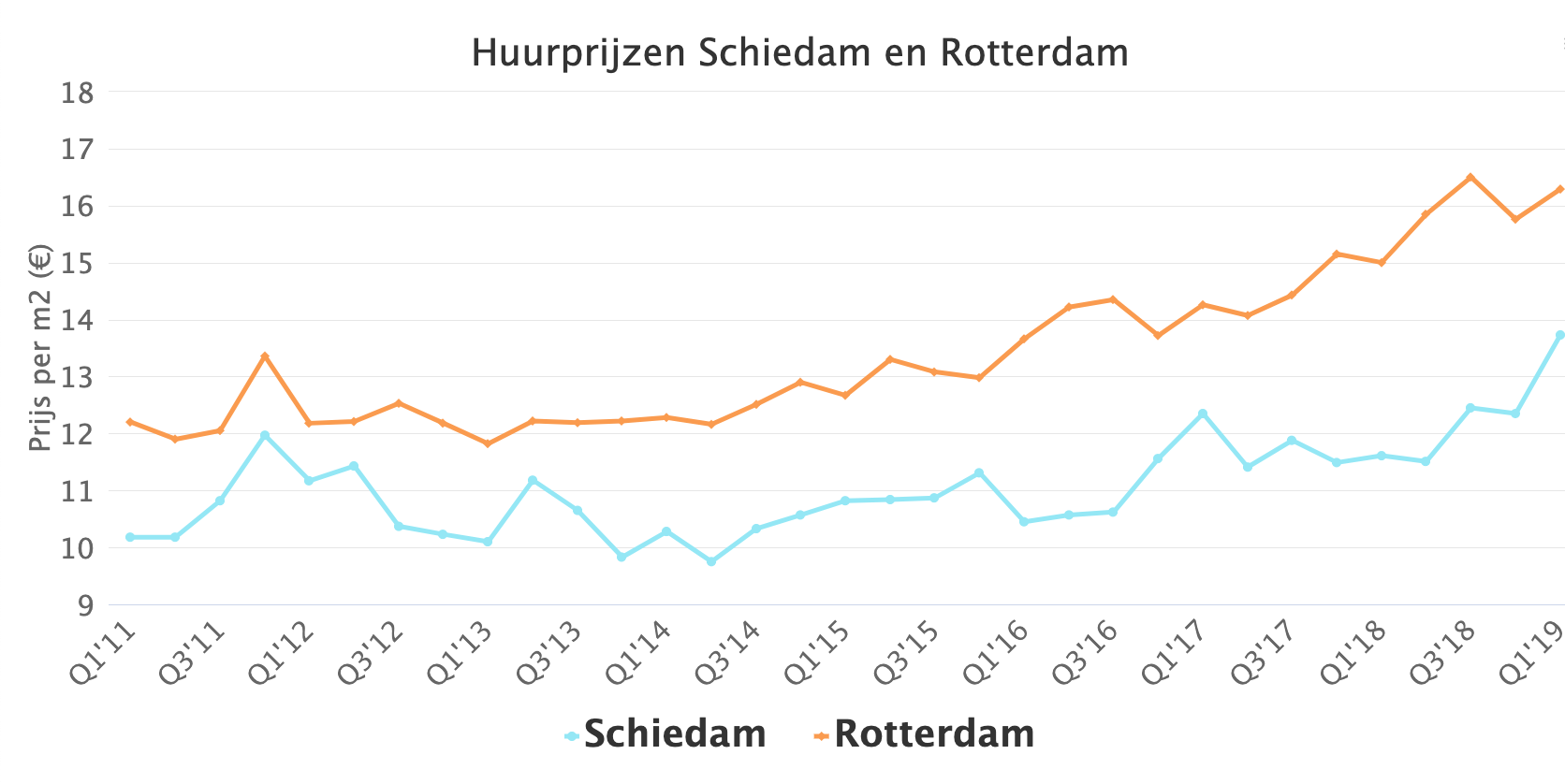 In Utrecht, new tenants paid 8 percent more for a rental home (€ 15.56) and in South Holland 6.9 percent (€ 15.65). A substantial price increase was also recorded in North Brabant: new tenants paid 8.4 percent (€ 13.02) more than in the first quarter of 2018. In North Holland, prices rose by 3 percent to € 21.19 per square meter. This makes Noord-Holland the most expensive province in the Netherlands.

In Flevoland, rising rents are mainly attributable to Almere, where new tenants also paid more per square meter in the past quarter: € 13.78, an increase of 15.2 percent. In Almere, a sharp increase has been observed since the end of 2016 and since the third quarter of 2017, the average rent has increased by at least ten percent every quarter. According to De Groot, the rising prices in Flevoland are a result of the high prices in North Holland. “Cities such as Amsterdam, Alkmaar and Haarlem are relatively expensive. A rental home there quickly costs € 1,200 for 60 square meters. Many people are not willing to pay that. Almere is a good alternative. " 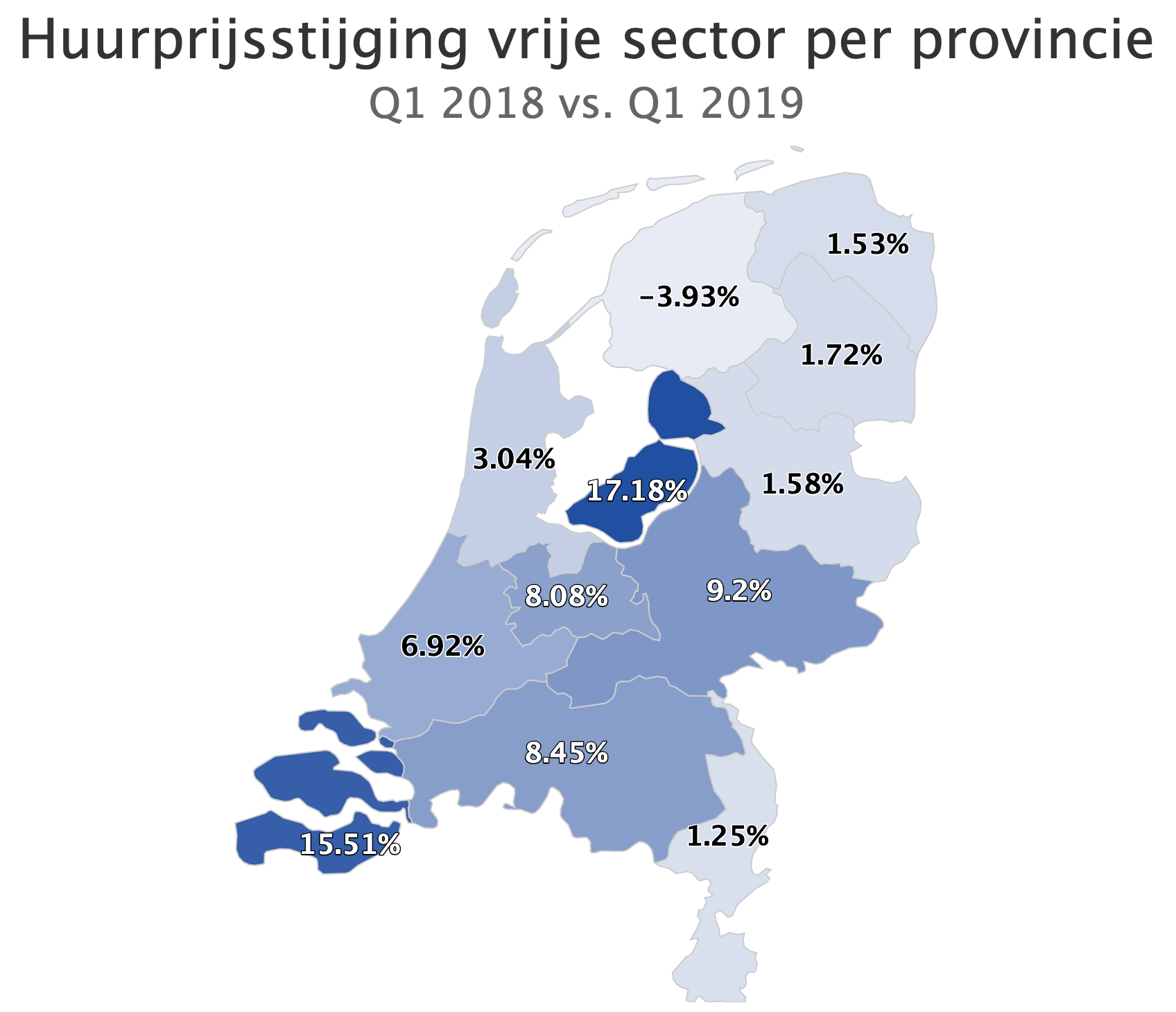 Despite a few outliers, the national price increase is moderate. In the past quarter, new tenants paid € 16.33 per square meter per month, an increase of just under 5 percent. "That is a lot lower than on the purchase market," says De Groot. Figures from the Dutch Association of Real Estate Agents (NVM) show that owner-occupied homes became 8.1 percent more expensive in the first quarter of 2019. At the same time, supply fell by more than 17 percent 8 . “The housing shortage on the purchase market also has an impact on rental prices. More and more people are turning to the rental market because they cannot find a home for sale. In that perspective, an increase of 5 percent can even be called low, ”says De Groot.

That the average rent in the Netherlands is relatively high (€ 16.33 per square meter per month) is largely attributable to large cities in the Randstad. Amsterdam is particularly influential. If Amsterdam is not taken into account, the average price is almost two euros lower: € 14.43 compared to € 16.33. In percentage terms, however, Amsterdam has a dampening effect: the price in the capital rose less than the national average.

Looking at the surface area, smaller homes remain by far the most expensive. For a house with an area between 50 and 75 square meters, new tenants paid an average of € 19.42 per square meter per month in the first quarter of 2019. Never before has the square meter price on Pararius been so high for this surface segment. A slightly larger rental home between 75 and 100 square meters cost € 16.56 per square meter.

There are also considerable price differences between surface segments within large cities. For a free-sector rental home between 50 and 75 square meters, the average rent in Amsterdam increased by 3.5 percent in the past quarter to € 26.39 per square meter. For a house of 75 square meters in Amsterdam you pay around € 1,980 per month.

There are several reasons for the high rent for a free-sector home in Amsterdam. The appeal of a city like Amsterdam is great for many reasons. The city has a large port area on the West side, a financial center on the Zuidas and the center is a tourist attraction, as well as a lively living environment for starters and young families. However, rental offers in the free sector in Amsterdam are very scarce. Supply and demand are far apart, which means that rental prices are high. An additional cause can be found in the growth in the number of expats coming to Amsterdam, according to a study by ING Economic Bureau. Since 2012, the number of highly skilled knowledge migrants has risen sharply. Expats have a higher income on average and are often looking for a home due to time pressure.

These measures must ensure that prices for middle incomes are contained. Jasper de Groot thinks differently about this: “These measures are only combating symptoms, favoring only a limited group of tenants. The underlying problem, the large shortage of medium-sized rental properties, is only getting worse. Instead of encouraging investors to invest in this segment, these plans actually deter them. This will lead to fewer new homes in the free sector and further rent increases. "

Amsterdam relatively cheap in Europe
On the international market, Amsterdam is relatively cheap, according to research by Zakenbank UBS 12 . Amsterdam is in ninth place in the list of fifteen major European capitals. In Paris, rental properties in the free sector are the most expensive: tenants pay an average of € 2,535 for a property there.

The differences within Rotterdam are smaller than in Amsterdam. Nevertheless, in almost all neighborhoods the average rent increased by at least five percent. The most expensive neighborhood, Center, is far ahead of the other neighborhoods in terms of price. Here, new tenants paid € 19.10 in the past quarter, an increase of 6.7 percent.

In IJsselmonde, prices fell slightly, paying 1.4 percent less than in the same quarter a year earlier: € 13.63 per square meter per month.

Rents are not only rising in the center of Eindhoven. The districts of Gestel, Stratum and Tongelre all have a price increase of around 13 percent compared to the first quarter of 2018. "Of the six major cities, we see prices rising fastest throughout Eindhoven," says De Groot. "There is still no question of flattening price rises, and that is no surprise in itself, given the increasing popularity of the City of Light."

The average rent per square meter per month of a rental home is equal to the monthly rent divided by the living area (in m2) of the relevant home.

For all rental properties, the area is between 50 and 300 square meters. No property is specified as a price upon request. All 10 of the above properties are therefore included in the calculation.