Our experienced management team offers a bespoke property management solution for all types of real estate: residential, commercial or block

"The demand for housing is still greater than the supply, but there is a limit to what people can and want to pay," explains Jasper de Groot, director of Pararius. “Due to the rising prices, more and more homes fall outside the middle segment. There are fewer candidates in that price category. The prices are therefore still rising but an average increase of 3.1% is then small. "

Amsterdam dampens Dutch rent increase
In our capital, prices rose by just 2.8 percent. Because relatively many homes are offered for rent in Amsterdam, this has a dampening effect on the average national rent. Nationally, new tenants paid an average of € 16.31 per square meter per month in the second quarter of 2019. If Amsterdam is not taken into account, the average national price increase comes to 5.5 percent (€ 14.53).

"But that is not a high price increase either," De Groot explains. "The free rental sector has no maximum fixed rent increase, but the average price increase does not exceed the maximum price increase in the social rented sector." increase depending on the income of the tenant. “And that applies to current leases with current tenants. The Pararius figures are based on properties that are rented out to new residents. ”The interim rent increase for current tenants in the free sector generally follows inflation. After a rental period of 12 months, the rent is increased on the basis of an indexation clause included in the lease.

The national rent increase is again a lot lower than that on the purchase market. According to the latest quarterly figures from the Dutch Association of Real Estate Agents (NVM), the transaction price of homes sold increased by 7.4 percent in the second quarter of 2019. The square meter price of a home sold increased by 6.3 percent compared to a year ago.

Amsterdam leads the way
In Amsterdam, the rent has been rising a few quarters in a row by no more than 3.5 percent. With that, the national cooling of the price increase this quarter could actually already be predicted, according to De Groot. “We can generally see the first signs of a trend break in our capital. Later, we see the same movement occurring in the rest of the country. ”The price development after the crisis is a good example of this. Rising prices were the first to be seen in Amsterdam, followed by Rotterdam and The Hague . Only then did the housing market get going again in other cities and areas.

In the past quarter, the average rent for new tenants in Amsterdam rose by 2.8 percent to € 23.42 per square meter. The rent increase in other large cities is also slowing down. Rents for homes in the free sector in Utrecht , The Hague and Rotterdam increased by 0.3 percent, 4 percent and 2.8 percent respectively.

Eindhoven
Eindhoven is an exception to this: prices rose by 7.3 percent compared to the same quarter a year earlier. New tenants paid € 14.73 per square meter per month, still almost ten euros below the average square meter price in Amsterdam. “Eindhoven is the only major city where prices have risen sharply. The prices here are also relatively low in comparison with other large cities. There is still a stretch in the prices, and our figures here show that nicely ”, explains De Groot.

High point not yet reached in medium-sized cities
Eindhoven is not the only city where prices are still rising: in some medium-sized cities, the high point has not yet been reached. In Breda the square meter prices increased by 10.7 percent to € 13.88 in the past quarter. The prices also increased in Hilversum , near Utrecht. New tenants paid € 15.81 per square meter per month, 11.1 percent more.

In Dordrecht and Schiedam , both an alternative to Rotterdam, rents rose by 11.4 percent and 13.3 percent respectively. In the second quarter of this year, new tenants paid € 12.74 per square meter per month for a 'Dordrecht house' and € 13.04 for a house in Schiedam. This is still more than three euros less than the square meter price in Rotterdam (€ 16.30). 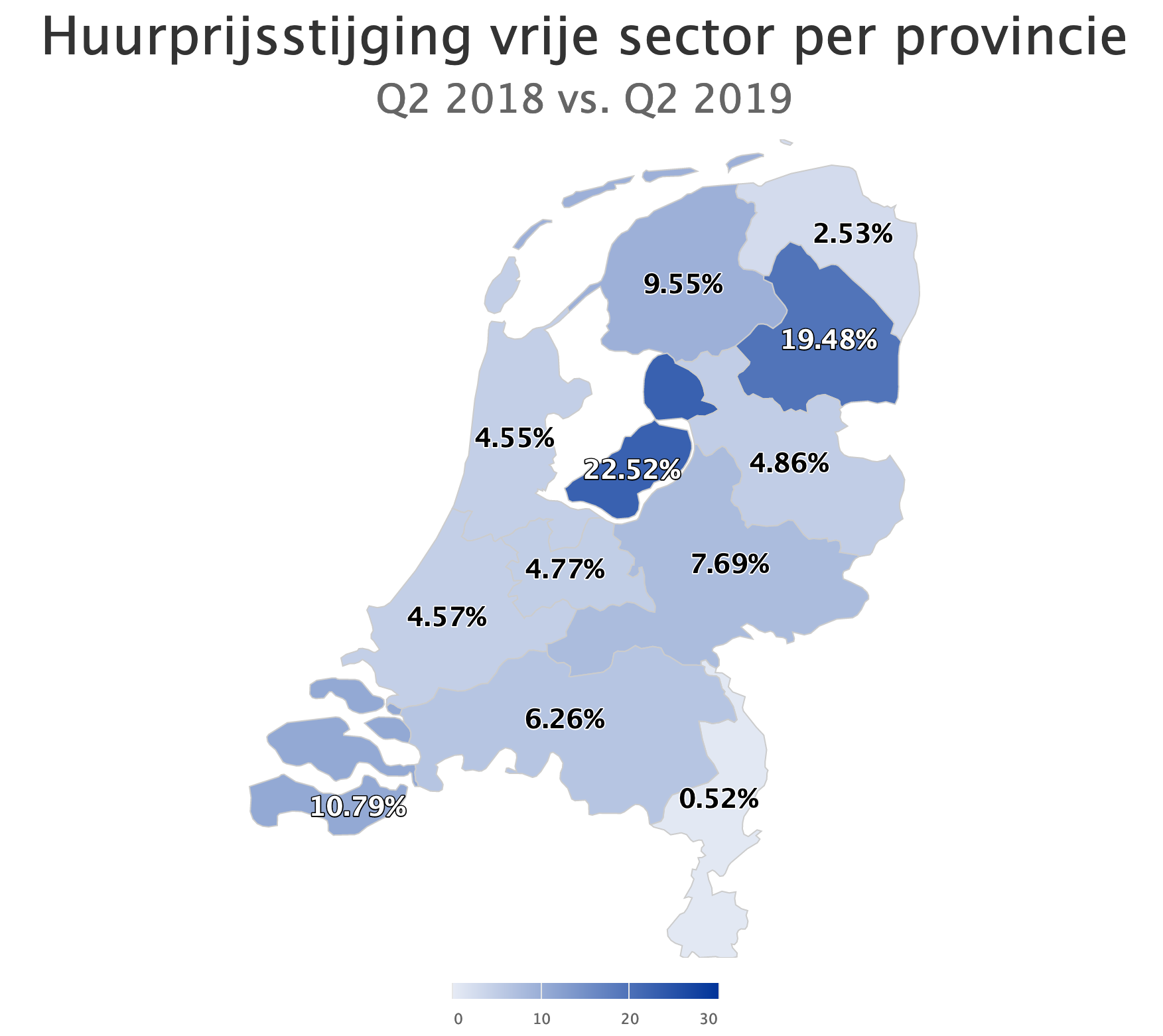 Golf movement in provinces
The dichotomy can also be seen at provincial level. Where the price increase was started later, the price increases in the last quarter were the largest. In the Randstad provinces of Utrecht, Noord-Holland and Zuid-Holland, prices rose by 4.7, 4.5 and 4.5 percent respectively compared to the same quarter last year. In Flevoland (+ 22.5%), Zeeland (+ 10.8%), Friesland (+ 9.6%) Gelderland (+ 7.6%) and Noord-Brabant (+ 6.3%), prices rose much harder. In Flevoland the percentage price increase was again the largest, new tenants paid 22.5 percent more for a free-sector rental home than a year earlier: € 13.60 per square meter per month.

The absolute square meter prices still do not come close to the three Randstad provinces. The price difference between the cheapest province (Friesland) and the most expensive province (Noord-Holland) is more than
€ 12 per square meter per month.

Basic living space most affordable
Furnished houses are the most expensive category to rent on Pararius. However, furnished houses do not rise much in price anymore. The percentage increase has not exceeded three percent for three consecutive quarters and last quarter prices rose only 0.6 percent. For furnished homes, € 18.99 per square meter was paid last quarter.

New tenants are the most economical with a basic rental home. For this last quarter
€ 11.70 per square meter per month was paid, a price increase of 7.2 percent compared to a year ago. An average tenant pays for a basic rented house of 70 square meters in the free rental sector about € 819 per month. For an equally large furnished home that is € 1,330 per month on average.

Too few homes built
The decreasing price increases, however, do not mean that the housing market is no longer overheated. Due to the increasing demand for housing in combination with lagging construction plans, supply and demand are still not getting closer. In the G5 in particular, as Amsterdam, Rotterdam, The Hague, Utrecht and Eindhoven are also called, the housing shortage is expected to increase further in the coming years. This is mainly due to a huge increase in the number of households. 'The household forecast for 2018-2060', a study by the Central Bureau of Statistics, states that the number of Dutch households will grow to more than 8.5 million until 2030. Now there are 7.9 million.

However, fewer homes are being built and delivered on the supply side than planned. There are not enough suitable construction sites, there is a lack of manpower in the construction sector and building material is becoming more and more expensive. Research by ABN Amro shows that in 2030 there will still be 157,000 homes in the Netherlands. The largest shortages are concentrated around the Randstad: Utrecht, Noord-Holland and Zuid-Holland have a joint estimated shortage of 126,000 homes.

New
construction plans However, the worrying predictions prompt many municipalities to increase the number of new construction plans. For example, the municipality of Rotterdam wants at least eight thousand new rental homes to be built for residents with a median income over the next ten years and Amsterdam wants to realize around 7,500 new homes over the next six years. In the longer term, an additional 230,000 homes will have to be built in the Amsterdam region. This amounts to 100,000 new homes in 2025 and 230,000 in 2040.

In Eindhoven too, major plans, including for several residential towers on industrial heritage site Strijp-S, are partly intended for social rental properties.

The proposal from Interior Minister Kajsa Ollongren to introduce an emergency button should also curb extreme rent increases in the mid-rental segment. This measure has since been postponed until the autumn, because both municipalities and market parties cannot agree with the proposed elaboration.

All these measures must ensure a healthier housing market, but many parties strongly question the positive effects of regulation. De Groot is also not in favor of even more regulation of the rental market. "That is actually getting in the way of becoming healthy," he explains. "Institutional investors and private landlords are deterred by this, while they are responsible for a large part of that much-needed construction production." "If an investor does not know where he stands because the government is constantly changing the rules, the risks of investing in this segment become too great," said De Groot.

Moreover, regulation not only hinders the quantity, but also the diversity and quality of the housing supply. More rental homes in the middle segment means more chances to find a suitable home faster. If the supply rises in relation to the demand, the prices will fall again, "says De Groot.

For all rental properties, the area is between 50 and 300 square meters. No property is specified as a price upon request. All 10 of the above properties are therefore included in the calculation.