House prices have never risen so fast. In January 2022, the CBS price index for existing owner-occupied homes was no less than 21.1 percent higher than in the same month a year earlier (Figure 1). This has surpassed the previous record, set in February 2000, by far. Back then, house prices grew by 20.1 percent on an annual basis. Also on a monthly basis, the increase of 3.1 percent was the highest measured by Statistics Netherlands since the introduction of the price index in 1995.

Although real estate agents have been reporting a decreasing number of viewings for some time , house prices continue to rise mercilessly. In euros, an average owner-occupied home sold between January 2021 and January 2022 is estimated to become as much as 75,000 euros more expensive (Figure 2). The previous record – a price increase of 28,000 euros in one year, also established in 2000 – was lost more than a year ago. So it took 20 years to match the 2000 record, and then just one year to nearly triple it again. It illustrates the current market madness, where houses are rapidly becoming unaffordable for households that do not yet own a home. 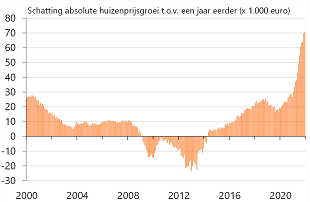 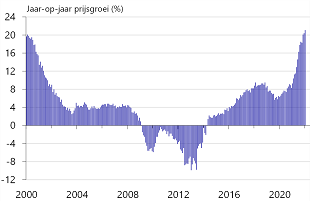 House price growth is expected to weaken this year

Despite the high price increases in recent months, we expect growth to slow down gradually. The economy is growing less exuberantly than in recent years and capital market interest rates have not fallen for some time now. On the other hand, there is of course low unemployment and the continuing severe tightness in the housing market.

The market's strong momentum, with demand many times exceeding supply, continues to dominate the picture this year. The high price growth of recent months also contributes via spill-over effects to a higher growth figure for the entire year 2022. If house prices do not rise further for the rest of 2022 but remain at the level of January, the average house price this year will still be 10 .9 percent higher than in 2021. Moreover, price growth has accelerated recently, so that higher average annual growth can be expected. However, the scarcity is offset by a number of factors that may depress house price developments (in the long run), although the uncertainty is high in some areas.

Rising mortgage rates do not immediately turn the market around

According to Van Bruggen Adviesgroep, the average rate for a mortgage with a fixed-rate period of twenty years has already risen by 0.45 percentage point this year; an increase of almost a third. This also removes the upward effect of falling interest rates on house price developments. Due to the fall in interest rates in recent years, households were able to borrow more and more and had lower monthly payments with the same mortgage amount. Falling interest rates also increase investor demand for housing.

It is no surprise that mortgage interest rates are rising. Mortgage rates generally move in line with capital market rates, and these have risen in recent months. This has to do with rising inflation, which increases the chance of the European Central Bank (ECB)'s support programs being phased out, as well as the chance that the ECB will raise interest rates.

Even if capital market interest rates rise faster than expected, a major turnaround in the housing market is still unlikely. House prices are generally slow to adjust when fundamental factors change. It is illustrative that mortgage rates in the US have risen by more than one percentage point since last summer, but that the housing market there has not yet cooled down.

War does have an indirect effect

The war in Ukraine is not expected to lead to a market turnaround either. The past shows that major impactful events, such as the 9/11 attacks and the start of the corona pandemic, do not automatically lead to a trend reversal in house prices and sales. Indirectly , of course , the war did have an effect on the housing market because of its consequences on the Dutch economy . Moreover , the war results in further rising prices in the shops and at the pump . If wages do not rise at the same pace, this affects purchasing power, leaving less for monthly housing expenditure.

How house prices will develop this year is surrounded by a lot of uncertainty. This is because the economic effects of the war in Ukraine are difficult to estimate and are highly dependent on the course of the conflict and the response of the West to it.

At the moment , we foresee that inflation will remain high for longer, but will decline to a normal level of around 2 percent in the course of 2023. However, if inflation remains high for longer, this will weigh on house price developments. After all, the maximum amount people can borrow depends on other necessary living expenses. If those expenditures rise and incomes do not rise correspondingly, people will be able to borrow less and therefore bid less on a house. The war in Ukraine is increasing the risk of a recession. If economic growth and unemployment figures turn out to be more negative than our estimates, house price growth is likely to be lower.

There is uncertainty not only about how the so-called fundamental factors will develop, but also about the pace at which this will lead to a different growth rate in house prices. Turns in the housing market are difficult to predict. Deviations between house prices and the price level justified given fundamental factors can persist for decades . Although our house price model predicts a leveling off in price growth, it is conceivable that the high price increases due to positive market sentiments will last longer. If house prices continue to rise without the fundamental factors justifying this, the risks will increase (see the section 'Towering house prices, increasing risks?').

Buying a house in the Netherlands